Today we are happy to announce the next Deleaker release. Deleaker 2019.2 is coming with the full support of RAD Studio: Delphi and C++ Builder.

You can get Deleaker for Delphi / C++ Builder right now at the download page. 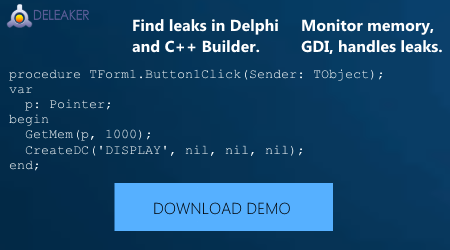 It is a very important milestone in the Deleaker’s lifespan. The fact is that from the very beginning one of the most important features of Deleaker was to let a programmer search for some leaks in the code without leaving the IDE. If beforehand Deleaker worked as an extension in Visual Studio only, now it integrates with RAD Studio. This means that you can search for memory leaks and resource leaks in both Delphi and C++ code directly in RAD Studio. Integration with versions from RAD Studio 2007 to the newest 10.3 Rio is supported. At the same time, Deleaker Standalone successfully finds leaks in code, compiled by versions of Delphi, starting with Delphi 7, and by versions of C++ Builder, starting with C++ Builder 6.0.

Let’s go on. The updated installer identifies the installed versions of RAD Studio, from which you can choose the ones you would like to integrate Deleaker with: 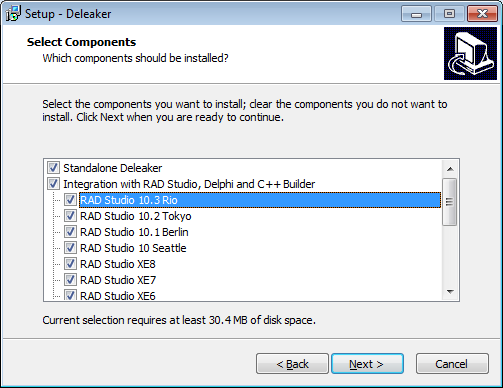 In the main menu there is a new item “Deleaker”:

Let’s see how Deleaker finds leaks in Delphi code. Create a new project, add a button, then allocate memory in the code, executed by pressing the button:

Start debugging, then press the button, close the application. Deleaker automatically takes a snapshot, and we get the correct list of leaks. For each leak Deleaker shows the complete call stack:

Double clicking or using the context menu makes it easy to go directly to the corresponding line of code:

Feedback is genuinely useful and unbelievably appreciated, please write us.