You can get Deleaker for Qt Creator right now at the download page. 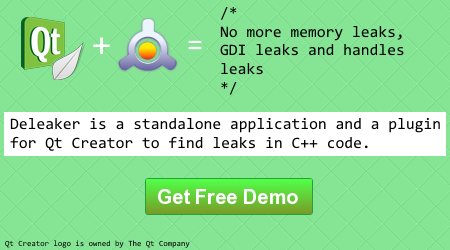 It is a very important milestone in the Deleaker’s lifespan. The fact is that from the very beginning one of the most important features of Deleaker was to let a developer search for some leaks in the code without leaving the IDE.

Fortunately, Qt Creator can be extended by third party plugins. It’s time for Deleaker to be a part of Qt Creator.

Qt Creator doesn’t use its own debugger but external debuggers instead, CDB or GDB. Deleaker cooperates with any of them to receive debug events notifications.

Let’s go on. The updated installer identifies the installed versions of Qt Creator, from which you can choose the ones you would like to integrate Deleaker with: 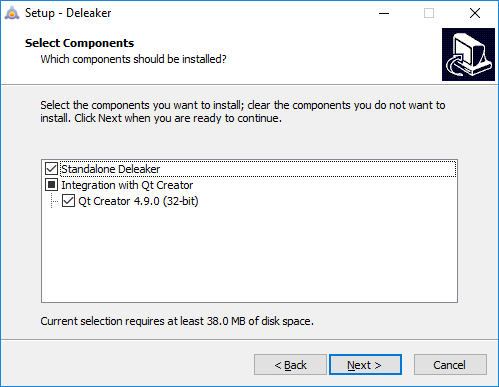 Launch Qt Creator. In the main menu there is a new item “Deleaker”:

Let’s see how Deleaker is looking for leaks. Create a new project, introduce a leak, allocating one instance of QPushButton. Imagine that someone allocated QPushButton but then decided not to add it to a layout:

Start debugging, close the application. Deleaker automatically takes a snapshot, and we get expected list of leaks. For each leak Deleaker shows the complete call stack:

Double clicking or using the context menu makes it easy to go directly to the corresponding line of code:

Feedback is genuinely useful and unbelievably appreciated, please write us.